I have found out so much about the Basque children in Salford since my last update on them, and I have met and been in e-mail contact with so many interesting and kind people who have generously shared their own research with me.

I met up with a local historian, Roy Bullock, author of Salford 1940 to 1965: Twenty Five Years in the History of the City of Salford and other books (detailed here but you need to scroll down a bit). He is currently researching Salford’s history between 1930 and 1940 and has worked his way through, photographed and catalogued the microfiches of the Salford Reporter for that period at the Local History Library. After a very interesting chat in the Deli-lama Cafe I arrived home to find he had sent me all the info! How wonderful is that?

It was suggested to me that I contact Bill Williams, another local historian and author of ‘Jews and other foreigners’: Manchester and the Rescue of the Victims of European Fascism, 1933-1940 (Manchester University Press).  He has devoted a whole chapter of this book to the Basque children and very kindly sent me a copy of it! Again, how wonderful is that?

So with the help of these two very generous people I now have the beginnings of a story to tell!

On the 28th May 1937 the Salford Reporter informed readers that “The Bishop of Salford (Dr. Thomas Henshaw) announced that some of the Basque children who are being evacuated from war-torn areas are to be cared for in the homes of the Salford Catholic Protection Society”. This included 8 or 10 boys and girls who arrived as a group of 90 children at London Road Station in Manchester on the 24th June who were assigned St. Joseph’s Home, Worsley Road, Patricroft in Eccles run by the Missionary Sisters of St. Joseph. Eccles is a small town in Salford which, until 1974, was a Municipal Borough with its own town council, but is now administratively part of the City of Salford. Finding out that there were children in Eccles too means I now have another strand of the story to investigate and another old local newspaper to research, The Eccles and Patricroft Journal.

On the Friday 18th June 1937, The Salford Reporter announced 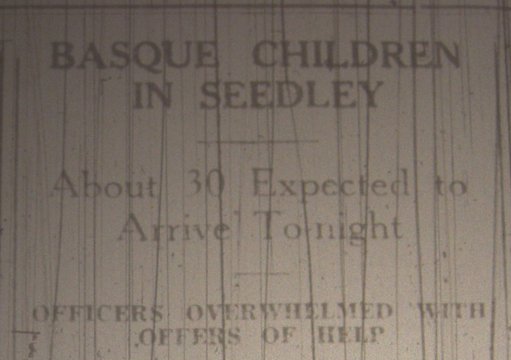 These children between the ages of seven and eight (according to this article, but older children are mentioned in the Manchester Guardian) “are one section of the hundred for which the Christian Volunteer Force is caring, and during their stay in Salford they will be accommodated at Harold’s Memorial Orphanage Home, Seedley Road, Seedley” The two other contingents of children were taken to Forces homes in Glasgow and Edinburgh. The children were a couple of days late because of a typhoid scare at North Stoneham camp, where they stayed on arrival in Britain.

A reporter who visited the home before the children arrived described “an atmosphere of busy happiness over the house” around the preparations which were going “full steam ahead”. Five rooms were already prepared as dormitories, “bright cheerful rooms decorated in yellows and browns with blue coverlets on the beds and blue floor coverings”. A Manchester firm donated baby dolls with eyes that “open and shut”, sets of tools and miniature planes for the boys as well as puzzles and games.

The Officers from the Christian Volunteer Force who were in charge of the home were Mr and Mrs Hutchinson, Staff Captain and Acting Matron, Adjutant McMullen and Commodore Hill.

All this information just from two old newspaper articles, and there is so much more to tell, including what the children ate, where they did their lessons, a trip to Blackpool and moving on to Grindleford near Sheffield after four and a half months (another area I now need to investigate).

Thanks to all the people who have helped so far, some I’ve not yet named as, unlike the two author/historians Roy and Bill, their names are not in the public domain and I want to get their permission first.  I’ve also linked up with a local multimedia artist and community researcher, Steve Cunio, to try and progress this project. I am really looking forward to his involvement.